I was asked by Davy Landman, a researcher at CWI (Centrum Wiskunde & Informatica) in Amsterdam, to shoot a video of the working Turing Machine they built using Lego.  It would be a promotional video for their upcoming exhibition about Alan Turing as it was Turing’s hundredth birthday this year on June 23rd.

We picked a date for the shoot and I prepared my gear. I had less than two weeks after the shoot to deliver the video.

There is also a YouTube version of the video if you prefer to watch it there.

Together with Davy I had prepared a list of shots we needed to tell the story. This was an excellent preparation as I did not have to make that up on the day of the shoot. CWI had a dedicated room for photo shoots and we used that room to set up the gear as it already had a white background installed (less stuff for me to bring along). 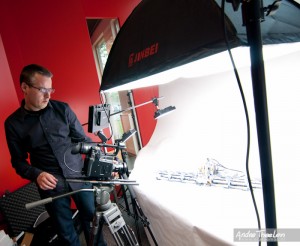 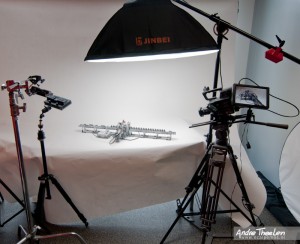 Davy helped me on the day of the shoot and prepared the Turing machine when needed. He could connect his notebook and load custom programs into the machine to make it do what we wanted it to do.

Lighting the different shots we planned took far more time than I had expected. It was great fun but it took all day instead of the 4 hours I had planned initially. As it was basically a product shoot, I noticed that I spent a lot of time watching and tweaking lighting details to make the shot as perfect as possible.

The main light source was a 4 x 85W daylight balanced 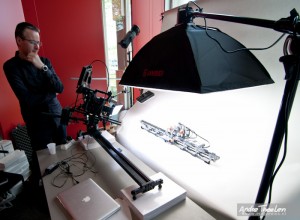 florescent light with 70 x 100cm soft box which I placed about 1 meter above the subject. This provided sufficient light to blow out most of the white background while creating nice even lighting and soft shadows on the Turing Machine at the same time. I also used two LED312-AS2 LED lights which acted as fill or accent lights when needed. Sometimes I also used the French flag of my matte box as a flag to prevent unwanted light to fall on certain areas of the scene. As you can see on the picture it sometimes took quite some fiddling to get the lighting just right.

I used the zebra and waveform monitor functions on

the camera constantly during the shoot. These are really essential tools in situations like this! You can quickly see if any highlights are blown out or if the background was evenly lit which is sometimes hard to determine on the monitor.

For this shoot, I used the Panasonic AF101 video camera with several manual focus Nikon Ais prime lenses (35m f2, 50mm f1.4, 55mm f2.8 macro, 85mm f1.4 and 105mm f2.5). I also used the Voigtlander 25mm f0.95 prime for a lot of shots. To be able to mount the Nikon lenses on the camera I used the excellent Novoflex Nikon to Micro Four Thirds lens adapter. As the AF101 has a crop factor of 2 due to it’s Micro Four Thirds sensor, the 105mm was used on only one shot as the room I was shooting in was not very large and I could not get far enough from the subject to get the framing I wanted.

Ensuring nice smooth movement, the Cinevate Atlas 10 slider was used for the moving shots of the Turing machine.

I uploaded the video to Vimeo on Sunday night, June 17th. On Monday morning, the team at CWI started sending out the message to the world. What happened next is nothing short of amazing. None of us expected this kind of response! 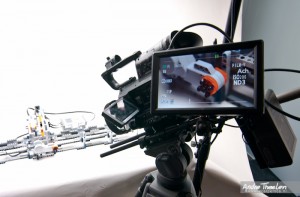 The video was selected as “Staff Pick” on Vimeo and featured on their homepage. It was featured on numerous blogs and websites all over the world and made it into the Customer Showcase section on Cinevate’s website.

More information on the LEGO Turing Machine van be found on legoturingmachine.org. You can find more information about the exposition “Turings Erfenis” on the website of CWI.