My first exposure to electronic music was in my first year in high school when my music teacher played “Spiral” by Vangelis. I had never heard anything like it and it opened a whole new musical world for me.

Later I bought my first synthesizer (a Yamaha TX7 module) and started making music myself.

Then, sometime around 1991 I met Harold Teunissen and we started to make music together under the name of Syndrone. We released 1 audio cassette en 2 compact discs. We decided to end Syndrone in 1997 because Harold had moved to the other side of the country and making music together became harder and harder.

Then a lot of stuff happened that made making music disappear to the background: a busy job, I got married and my daughter was born. 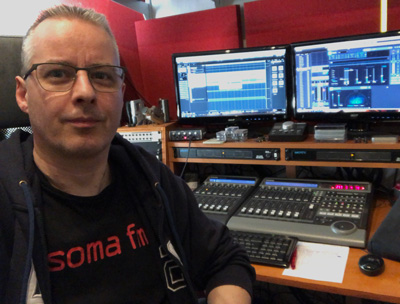 Me in the studio

Fast forward 11 years. I dusted off my old gear and starting looking on eBay for those classic synthesizers I back then couldn’t afford but could now be bought for a fraction of the new price. I also started building my own modular synthesizer which was something I had always wanted to do.

Then, 25 years after the last Syndrone album, in May 2021, I released my first solo EP “Almost Morning Now” under the name Sequenced Reality.