The design of the Oakley Sound VCO was originally inspired by the classic sound of the Mini’s VCOs with the central core of the oscillator being somewhat similar. Four output waveforms are provided simultaneously; falling ramp sawtooth, triangle, pulse and sinewave. Output levels are 10V peak to peak. 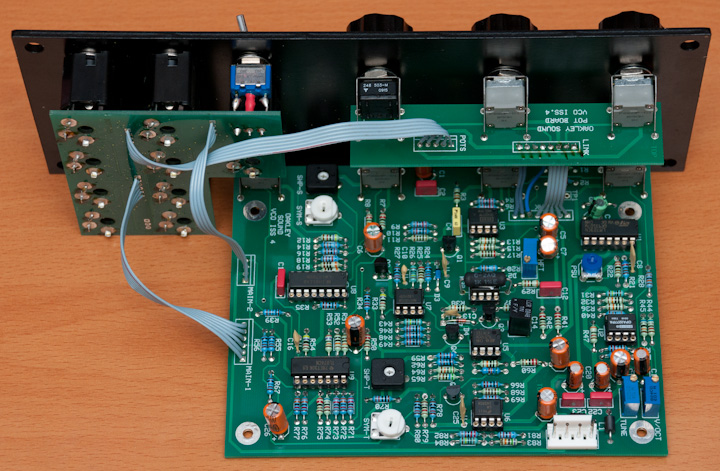 The Oakley Noise and Dual Filter module is used to generate non pitched sounds such as wind, surf and other ethereal sounds. Two types of noise output are provided. White noise which when unfiltered sounds like gas escaping, and pink noise which sounds more like a big waterfall. 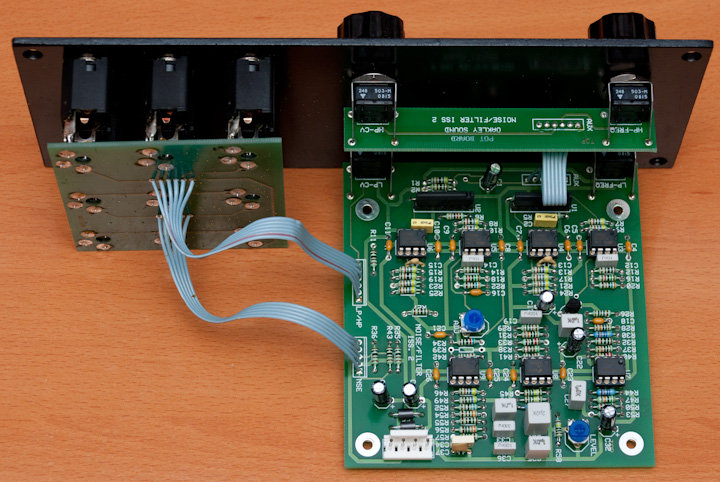 The Superladder VCF features both voltage control over frequency and resonance. Unique to any diode ladder filter is that it has a variable shape output. The filter that I built is an older version using transistors only while the current version is a diode based filter. 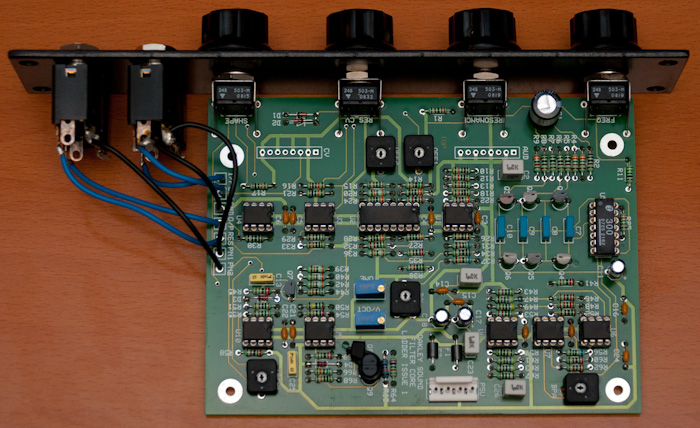 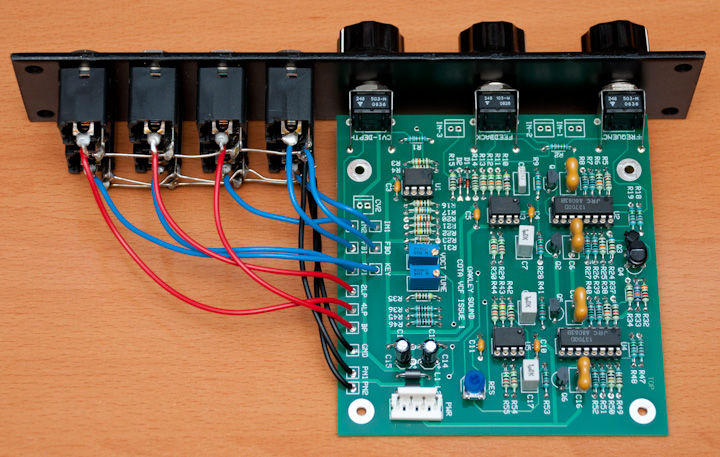 The complete non-linear response and discrete circuitry of the Journeyman Voltage Controlled Filter gives it a unique sound of its own. The filter can be configured in either -6dB/octave high pass or -12dB/octave low pass modes. 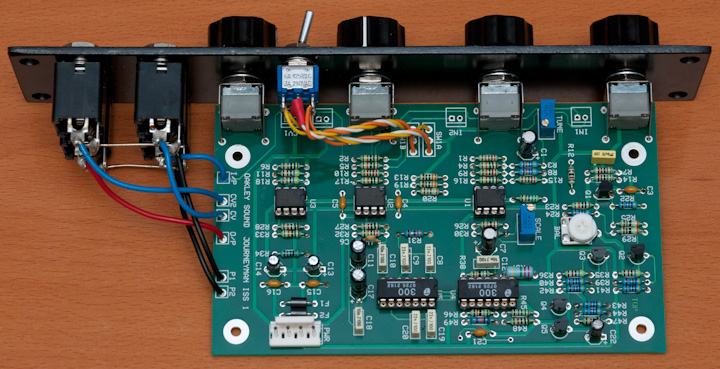 The design of this ring modulator module is based on the classic 4014 sub-module which was used on the 2500 modular and 2600 semi-modular synthesisers. The design has a fully discrete core but uses two op-amps for input and output amplification.

The Equinoxe module is a version of the classic four stage OTA based phaser. Wonderfully lush and smooth, it is similar in sound to the phaser used by Jean Michel Jarre on the Oxygene and Equinoxe albums. The unit includes a useful internal low frequency oscillator with accompanying bicolour LED. The centre frequency of the phase shifter can also be controlled by an external control voltage. Thus allowing envelope generators to be used to sweep the phaser to create filter type effects.

This Overdrive module is a simple but very effective waveform modifier module. It has two basic modes selected by a switch. Hard clipping is a hard edged distortion type effect useful for grunging up a signal. Soft clipping is a more subtle effect and produces a clean sounding overdriven amp sound. 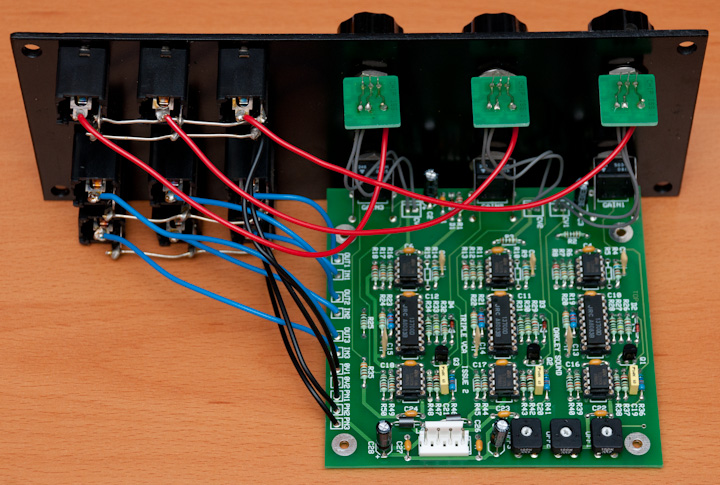 The Multimix is a three channel mixer module. The three inputs have each an independant level control. Each level control can be set so that the gain of the input is anything from -1.1 to +1.1. This means that not only can inputs be added together, but can subtract as well. With each input knob set to its middle position, then none or very little of the input signal will reach the output.

The ADSR/VCA is a dual purpose module. Not only does it feature a four stage envelope generator, but it also has a high quality VCA onboard. 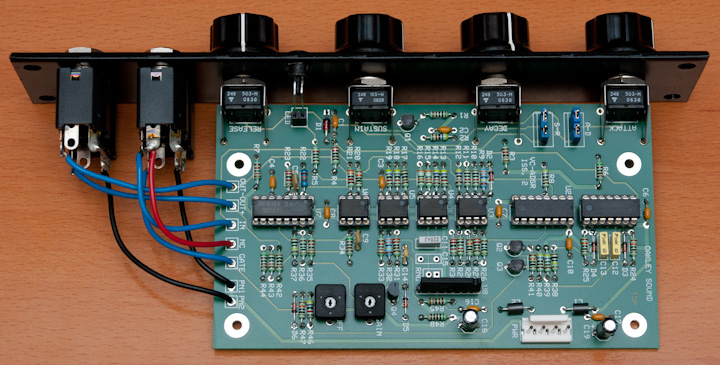 This VC-LFO is a versatile voltage controlled low frequency oscillator module that can also be used as an audio VCO over a useful range. The unit features sinusoid, sawtooth, ramp, triangle and square outputs. All are available simultaneously. A sync input is available to reset the waveforms to a fixed point. 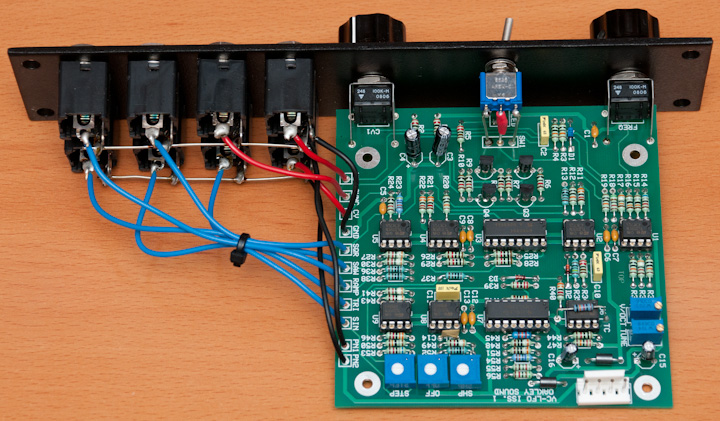 The Sample and Hold module has two modes of operation. The first is the ‘sample’ mode. If the clock signal is inserted into the ‘Clock [rising]’ input, then when the signal rises over 2V or so, the command is given to hold. The Hold output will then remain fixed no matter what the input signal is now doing. That is until the command to hold is given again.

The second mode is ‘track’. This functions like the so-called ‘sample and hold’ module on the Korg MS-20. Here, the hold output actually follows the input signal slavishly, but only when the clock input is below 2V for the clock rising input (or above 2V for the clock falling input). But when the command to hold is given, the ‘hold output’ is fixed and unchanging.

An envelope follower takes an audio input and converts it into a control voltage. This control voltage will rise and fall with the overall volume of the input signal. The louder the input, the bigger the output of envelope follower. Another feature of the Oakley EFG, is the provision of a gate extractor. This part analyses the peaks in the music and creates a gate type signal in time with these peaks. This can be used to trigger envelope generators in time with an external drum loop or click track.