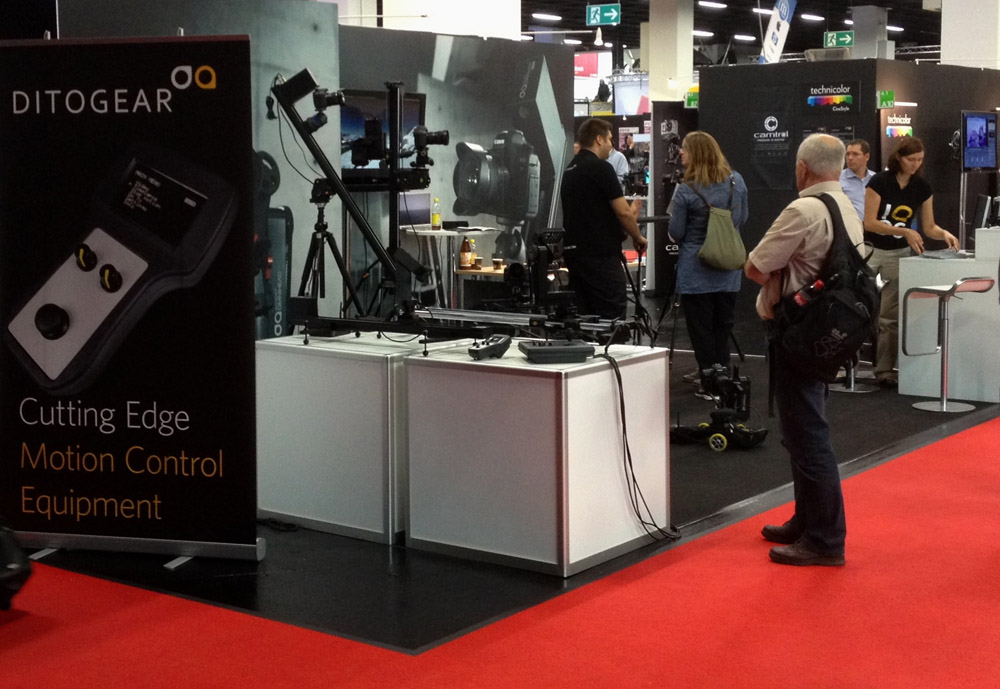 The main reason I went to Photokina was to check out Cinevate’s new add-on kits for their Atlas slider family: motion control. The add-on kit has been developed by Polish company Dito Gear and will be available soon. With the Dito Gear add-on installed, very powerful motion control functionality is added to the slider. When I found their booth, Dennis Wood of Cinevate happened to be present and I had a very nice chat with him. I thanked him for including the LEGO Turing Machine video I made in the Customer Showcase blog on the Cinevate website. He took all the time to talk to me and answer my questions. We talked about the Dito Gear stuff and he showed me some things it can do. The most complex setup had a six axis motion control unit, remote controlled/programmed by an iPad via Wifi. Very cool stuff.

My main interest is using the Dito Gear solution with my Atlas10 and Atlas30 sliders. Dennis explained that the kits are basically the same for all sliders (Atlas10, 30 and 200) and that the mounting plates are different for each slider.

I also asked Dennis about the Cinevate Jib. His reply was: “Ah, you mean the one we should have released 6 weeks ago?” 😉 He explained they redesigned the original jib that has been shown on NAB, earlier this year. They changed the counter balance fine tuning mechanism. It is now on the outside of the jib tube, instead of on the inside, so you can see where the weight is. The new jib has been made lighter (about 12 kg) and can handle up to 50kg of load. The tube is one piece and cannot be extended. This was done to make it as strong as possible. Dennis told me that at full load (50kg load and 100kg counter weight) the sagging of the tube is 0.1mm. Pretty impressive. Another change is that in addition to the tilt marker disc there will also be a marker disc for pan. He concluded that “optimistically” the jib should be available for sale in about 8 weeks.

Just around the corner of Dito Gear was the Marcotec booth with Kessler Crane gear on display. I checked out the K-pod tripod system which is a *really* heavy duty tripod system designed for carrying cranes and jibs. It can handle loads up to 500lbs or 226 kg (!). It can be fitted with wheels and a flexible track (Kessler K-Flex track) and can be used as a dolly that way. I like their solutions as they are very modular, just like Cinevate’s products. Philip Bloom was also at the Marcotec stand. Unfortunately, I managed to miss Philip’s talk at the Canon stage.

Of course, a lot of camera’s were shown at Photokina but I think a trade show is not the place to try out a camera. It’s nice to be able to actually hold a camera and fiddle with the knobs to get an impression of how the device handles. However, you really need to shoot in different conditions and see how the footage holds up in post.

An interesting new camera is the Panasonic GH3 which I think could be a nice addition to my AF-101. The GH3 shown was a pre-production model but looking at the short film “Genesis” Bruce Logan and Philip Bloom shot with it I think it will be a very interesting camera.

That concludes my day at Photokina. I must admit I’m not a big trade show fan. I generally find it way too busy and it really is not a good environment to test out gear. I quickly loose interest after a couple of hours of walking through big halls with vendors. Maybe it’s just information overload. That being said, I saw what I wanted to see and learned a few things about gear that is on my wish list.