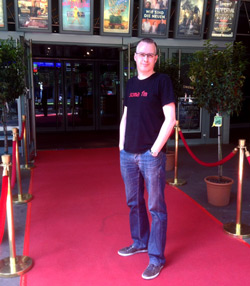 Last weekend I visited the Cinestrange Film Festival in Braunschweig, Germany, together with my wife. My short film “I Want To Believe” was part of the short film selection. It was the first “real” festival where my film was selected after the internet based Viewster Online Film Fest. Braunschweig is a 4 hour drive for me so this was a good opportunity to visit the festival. These 4 hours however became quite a bit longer as we encountered lots of traffic jams on our path.

Check out the trailer of the festival below and spot a scene from my film at 00:26! Me on the red carpet at Cinestrange

The Cinestrange Festival was the first film festival I attended as a guest. Cinestrange is not a big festival and most visitors where locals. However, the festival invited American director John Badham (“Saturday Night Fever”, “Blue Thunder”, “War Games”, “Short Circuit”, etc.) as a special guest and about half of the feature films programmed were from his hand, the other half were features specifically selected for the festival.

Although I have no problem understanding German, I prefer to see the original version of a film (in Germany all foreign films are generally dubbed in German). That’s why I didn’t see any of Badham’s films although I would have liked to have seen War Games again.

Cinestrange programmed 7 short films, including my film. The first block of 4 short films screened at 5 pm on Friday. We arrived just in time due to the traffic jams on the way to the festival. I was quite disappointed with the number of people attending this screening. No more than 10 people, including ourselves, where in the theatre… The quality of the films was pretty high. I enjoyed watching them all. I liked “The Visitant” by Nick Peterson and “On/Off” by Thierry Lorenzi best.

At 5pm on Saturday the second block of short films was programmed. Three films were screened: “Uberstein – Operation Wunderwaffe” by Manual Vogel, “In The Deathroom” by Milos Savic and the European première of my own film “I Want To Believe”. While watching “In The Deathroom” it was clear to me it should win the award for best film. The cinematography, story and acting where top notch. Great film making. Seeing my own film on the big screen in a real cinema was amazing. It looked and sounded great but at the same time it was very weird to see my film in that setting for the first time with a real audience. It was also weird realizing that my film was screened alongside all these great films. Something I had hoped for but never really expected.

All film makers were present during the screening of the last 3 short films and we were called to the stage afterwards to do a little Q&A with the public. It was good to see that this time there were significant more visitors than during the first screening! Q&A with the audience after the screening. I’m on the far right.

I couldn’t attend the award ceremony on Sunday evening but it was good to hear that “In The Deathroom” had indeed won the Cinestrange best short film award 2014! If you have the opportunity to watch the complete film, do so. You can watch the trailer below.

I had a great time at Cinestrange. The festival had a very friendly atmosphere although I would have liked more involvement of the festival organisation with the attending film makers. I enjoyed the films and the panels I attended. Seeing my film on the big screen for the first time was an amazing experience I would not have liked to miss.