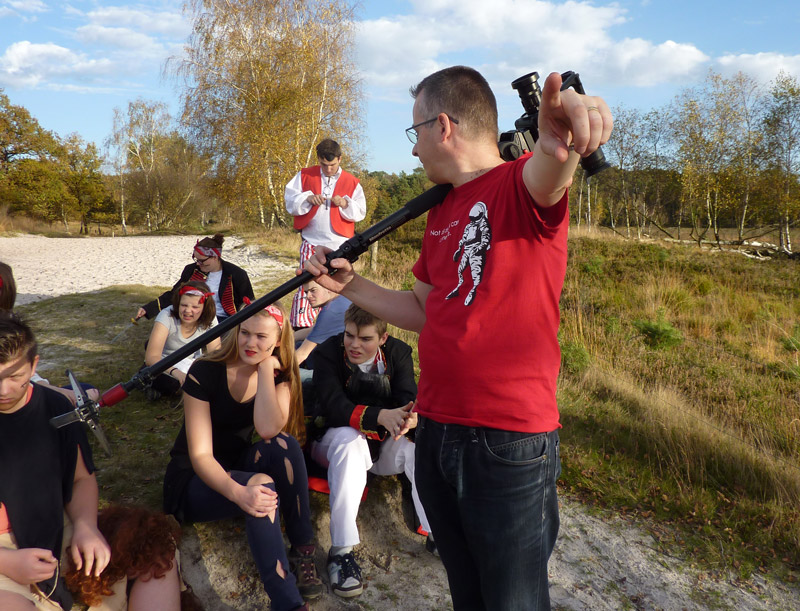 A friend asked if I could help him with a project he is working on with a youth fanfare he’s part of. They are planning a big concert next year playing brass arrangements of soundtracks of famous movies. The idea was to show a video with an own version of the movie while the soundtrack is performed. The performing kids (in age between 12 and 15) selected the movies they wanted to perform.

The first two (from a total of 10 videos that will have to be created) where “Pirates of the Caribbean” and “Titanic”. The kids wanted to make fun videos loosely based on the movies.

We shot these first two videos last weekend during their yearly camping trip. The weather forecast looked great so there would be no problem shooting parts of the video outside.

Preparing for the shoot

Based on the input of the children I wrote two short scripts to have a more solid idea of the scenes we would have to shoot. As I had no time to visit the location before the shoot and the shoot itself would be a lot of improvisation, I did not make a storyboard. Instead I made a general shot list that I could use as a guideline and check list during the shoot. That way I made sure we shot enough footage to be able to edit everything together in a coherent way. Based on the script I prepared the necessary gear. Fortunately things were less complex for this shoot as there was no need for recording audio. I would basically be a one man band during the shoot but would have some help of a couple of friends who were accompanying the youth.

A very cool last minute thing was the making of a head in a jar prop. I read an article about that a few days before the shoot and we were able to pull it off and use it as a prop in the “Pirates” video.

It was really fun working with the kids. They were really enthusiastic about the shoot and I think we really enjoyed ourselves. As it was no high-end production the only pressure was to capture all needed footage in one day. None of the kids had any acting experience and I didn’t push them very far to get exactly the performance I would like to have as I think that would have worked counter productive. For me it was important that the kids had fun and did not get the impression they were doing something “wrong”. When we really had to do a retake I explained what I was going for and where their performance could be changed. That worked just fine.

On Saturday we started with “Pirates of the Caribbean” which had interior and exterior scenes. The weather was excellent that day so I started with the interior scenes hoping to make good use of the nice afternoon sunlight later on. After a couple of hours of running in front of the camera the kids are getting tired. But we’re not done yet…

The interior scenes went pretty smooth without any problems and after a short lunch break we went outside for the exterior shots. There were a lot of chase sequences so the kids had to run a lot. That started out just fin but as the day progressed I noticed some of the kids were getting tired and that impacted their performance and the willingness to do stuff. I couldn’t do very much about that and tried to work around it but some scenes didn’t worked out as good as they could have been because of that.

We shot the “Titanic” sequence on Sunday. This was an interior green screen shoot. The kids wanted to make fun of the famous Titanic scene with Leonardo DiCaprio and Kate Winslet on the front of the ship. The live action will be combined with animation elements to emphasize the comic element. While I was setting up and lighting the green screen, the kids were dressing up. The shoot went very well and we had all scenes done in about 2 hours.

As I was working with kids I really didn’t want to spent hours adjusting lights and/or sets. I tried to keep the technical stuff as simple as possible without compromising too much on image quality.

For the “Pirates” interior scenes I set up one 650W fresnel which lit the table were the pirates were playing a game of dice. The camera was on a Kessler Pocket Jib for ease of movement and to be able to quickly change camera perspective. I used small LED lights to add some fill light in a couple of scenes. Setting up the Kessler Crane Pocket Jib for the interior shots (the beer bottles were empty of course!)

For the exterior scenes I used the Canon HF-G25 camera on a simple home made stabilzer for scenes where I was running with the actor(s). For all other scenes I used my Panasonic AF101 on a monopod which worked out just fine but allowed me to move quickly from one location to the next. Taking the camera as low as possible for an action shot.

For the “Titanic” sequence I set up the green screen and lit it with two soft boxes on each side with 300W fluorscent daylight bulbs. I used the waveform monitor on the AF101 to dial in the green screen and the result was a very evenly lit screen. Perfect! The key light for the actors was a diffused ARRIlite 750 Plus and a LED light as fill light. The camera was on a tripod for all scenes. No dolly or jib moves for this video to keep post production as simple as possible. Setting up the green screen for the Titanic sequence

The kids enjoyed themselves and really loved the rough cut of the Pirates video I showed them. I think during the shoot they couldn’t really visualize how it all would be coming together and it was great watching them laugh at their own video when they were watching the rough cut. I also had a lot of fun and learned a few things along the way. Working quick and getting an as good as possible image while working within the given constraints.

All in all a fun weekend!