On Monday, May 24th 2021, I released my first solo EP “Almost Morning Now” as Sequenced Reality. It has been 25 years since I released my last album as one half of the band Syndrone.

You can check out my music on sequencedreality.bandcamp.com or use the player below.

In the period between ending Syndrone (end of the ninetees) and now making music disappeared to the background. However, I kept listening to (electronic) music and visiting live concerts. I also have been spending a lot of time making short films and music videos.
And, about 10 years ago, I started building modular synthesizers with the intention of eventually using them to create new music. During the pandemic I was lucky to be able to work from home which saved a lot of commuting time and left me with more time and energy to build stuff. I was able to finish a lot of partly build projects and finally sat down to debug and properly calibrate a lot of modules that had been on my to-do list for a while. 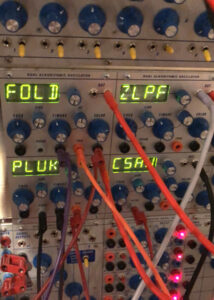 Detail of the modular patch for Almost Morning Now

And then it happened one evening at the end of last year. I was testing and playing around on my DIY Buchla 200 series modular synthesizer clone with a couple of Buchlafied Mutable Instruments modules I had just finished. I must have been tinkering with the patch I made for more than an hour when I suddenly realised “this sounds great!”. So I started recording a couple of performances into Cubase and those were the first recordings for what would become the title track “Almost Morning Now”.

The process how I made the tracks was fundamentally different compared to how we made music during the Syndrone period. In the ninetees, there were no DAWs a student could afford. We used an Atari ST with Cubase and prepared the tracks in the sequencer (Cubase had only MIDI sequencer functionality at that time, no audio). When done the tracks were played in real-time using Cubase and recorded as a stereo mix directly to DAT (Digital Audio Tape).

This time I basically performed everything live and recorded the separate layers directly into Cubase as audio. I still use Cubase (on PC) but did not use it as a MIDI sequencer this time. When the basic audio was recorded I used it to arranged the tracks, adding samples and field recordings I made. If needed I cleaned the recordings using the excellent Izotope RX application.
After working on a track for a while I took a pause for a few days and started again with fresh ears. I found this to be essential to get some distance from the composition as your ears and brain will start to deceive you when you work for an extended period on a piece of music.

Getting ready for the first Sequenced Reality release

After I finished the arrangements of the tracks I started mixing them in Cubase. I really enjoyed this process. I learned a lot and making use of all the excellent functions of Cubase and some third-party plugins was great. The downside of this however is that these almost unlimited possibilities can send you down the rabbit hole of spending a lot of time on trying to get things perfect just because you can, in theory at least…

I decided to let a professional mastering engineer do the mastering for the new EP. I do not have the experience and the right gear and listening environment to do this. And I think it is very good to let a set of fresh ears get your music ready for publishing.
Stephan Mathieu of Schwebung Mastering mastered my tracks and I am very pleased with the results.