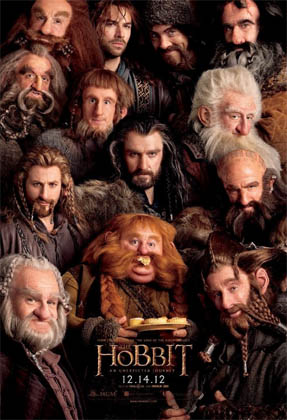 Tonight, I went to see the 3D HFR (High Frame Rate) version of The Hobbit. I read a lot about HFR the last couple of weeks and read positive things but also a lot of negative things of people who experienced the movie.

Just to tell you where I’m coming from: I don’t like 3D movies. I always go see the “normal” 2D version of a movie if possible. I think 3D adds nothing to a movie and it’s just a gimmick distracting the viewer from the real story.

That said, I wanted to experience the 3D HFR technology myself and make up my own mind about it. Now that I have seen the movie I want to point you to a blog post by Vincent Laforet titled “The Hobbit: An Unexpected Masterclass in Why HFR fails, and a reaffirmation of what makes cinema magical”. In many ways my experience of the movie was a lot like his.

The first 10 to 15 minutes were terrible. Somehow my brain had to adjust to the higher frame rate (48 fps) of HFR compared to the conventional 24 fps. I just didn’t know where to look. To my experience everything went way to fast, the cuts between scenes were too soon as my eyes didn’t have time adjust to the content of the previous scene. There weren’t any visual strongholds where my eyes could hold on to. This effect continued throughout the entire movie. Especially in action scenes, the 3D HFR just doesn’t work for me. I just didn’t know where to look and it becomes exhausting very quickly.

After the first 15 minutes or so I got a bit of used to the 48 fps and then the HFR 3D effect really kicked in for me. To me, it looked like I was watching a diorama with several layers of images behind each other. Instead of 3D it had the effect of 2.5D on me, like you see in platform games where several background elements scroll at different speeds as the main character in the foreground. This effect was most distracting in scenes where several actors were in the frame.

Another thing, and I think this is the effect of the high frame rate, is that the wide angle shots look very fake. The wide shots of the Shire or of the many beautiful landscapes just look… plastic, fake, video-ish. I can’t really explain it better.

One last thing I noticed, as Vincent Laforet also describes, was that nobody laughed the first half of the movie. Not even a chuckle. The only time I heard people laugh was after Gandalf’s party falls down after fighting the Aardmen and the dead Aardmen king falls on top of them. This was somewhere in the last hour of the movie. I must admit this was the most funny part of the movie but there where enough moments throughout the film which should provoke some chuckles in an audience. My guess is the rest of the audience had the same adjusting problems as I did?

OK. Enough about the effect of the technology. What about the movie itself? The story?

Although the movie runs for a hefty 170 minutes I didn’t get bored. I am  more of a science fiction person than a fantasy person but Peter Jackson succeeded in holding my attention for the length of the film. That’s always a good sign. Story wise I would say it’s an “OK” movie.

Making a movie is a lot of work. I shot a short film myself which is still in post production so I know a little bit about what it takes to make a movie on a tiny scale, so creating something like The Hobbit is just a huge undertaking. I think it’s great Peter Jackson followed his vision, stuck his neck out, and shot the movie how he would like to see it. If he had not done it we wouldn’t have had this experience.

However, 3D HFR is not for me. It is too much of a distraction to the cinematic experience. Stu Maschwitz described it very well when he said “Filmmaking is a process of removing information”. See his interview on 24p. 3D HFR adds too much information for my taste.

But don’t take my word for it, or anyone else’s for that matter. If you have the chance, do go see this version of the movie and make up your own mind!