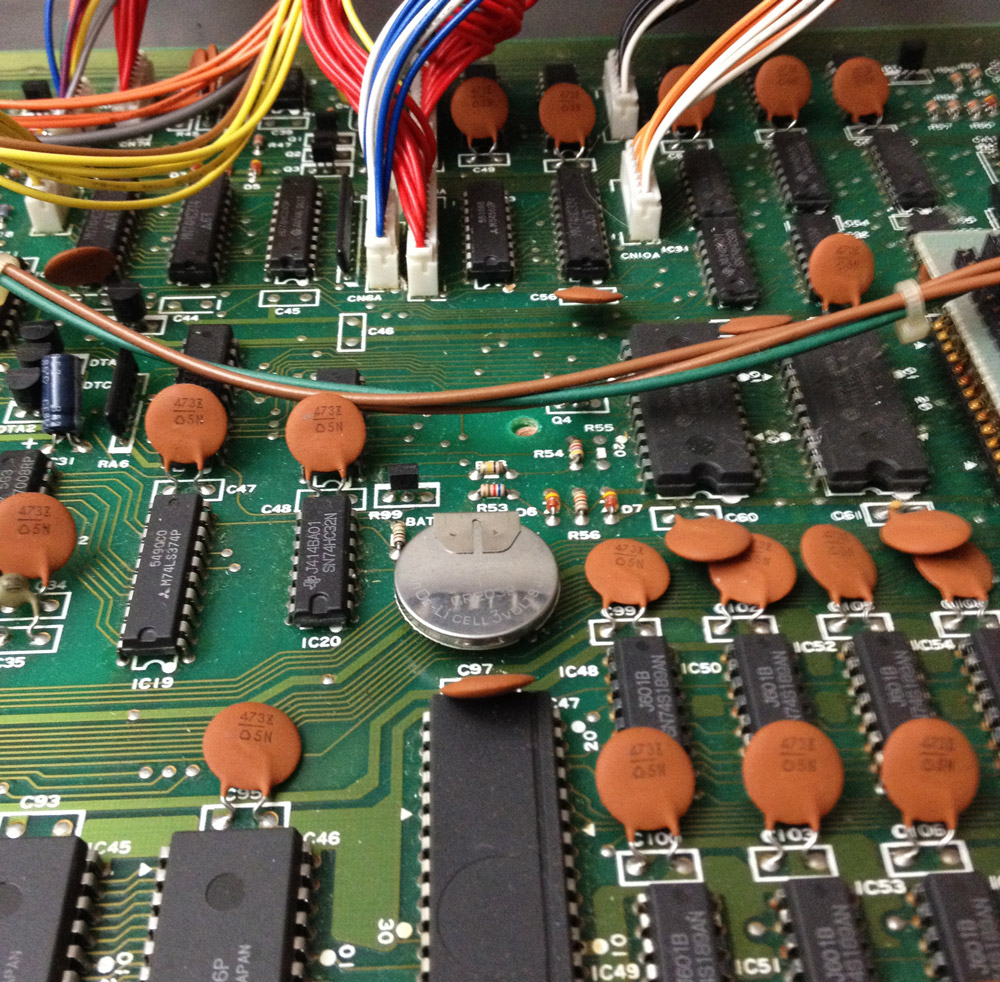 Some time ago I bought a Yamaha EX-5 on eBay. As it was located close by I drove there to pick it up myself. While talking to the seller she mentioned she had more stuff for sale. The Korg DW8000 was the only thing I was interested in. I tested it and although it seemed to function as it should there was no sound on the outputs so I did not buy it.

The Korg DW-8000 is a hybrid synthesizer with 8 voice polyphony and 16 sampled waveforms. The DW-8000 has a built-in arpeggiator and digital delay unit (up to 512ms delay, phasing, flanging, chorus and other time effects). The VCF and VCA are analogue and have independent envelopes. All parameters can be altered in real time via a single programmable slider. The keyboard is velocity sensitive and supports aftertouch. It was produced by Korg between 1985 and 1987.

Back home I couldn’t get the DW8000 out of my mind and started researching this vintage synth. I already knew a bit about it and really liked the analogue sound I had heard in several videos and audio samples on the web. I never, however, had looked into the more technical stuff of this instrument. I downloaded the manual and service manual and discovered that more people had experienced a silent DW8000. Apparently, this problem is caused by a dead backup battery on the main circuit board. It sounded like a fairly easy fix…

So I contacted the seller again asking if the DW8000 was still available as I feared it had been thrown away as it was not working when I had tested it. Luckily that was not the case and I could pick up the synth for a nice price.

Opening up synths is often a difficult and time consuming procedure. Usually there are plenty of screws of different sizes and it is more often than not unclear which ones are actually needed to be removed to be able to open the synth without damaging the inside or stuff falling out. That’s where the service manual comes to the rescue. You will find a exploded view of the enclosure and if it’s a really good manual, it will describe in detail which screws to remove (and in what order). For the DW8000 it was pretty straightforward and after carefully turning the DW8000 upside down and removing the screws I could remove the cover and check out it’s intestines. This instrument clearly hadn’t been used for quite some time so the first thing I did was remove the accumulated dust and dirt.

Looking at the circuit boards there seems to be some kind of extension board installed on the main circuit board. I have no idea what it’s function is. If you know what it is, let me know! Original Korg DW-8000 backup battery soldered to the main circuit board. WHY!?

The original backup battery of the DW8000 is soldered onto the main circuit board. Why anyone would even do that is beyond me…? I removed the screws holding the circuit board in it’s place and carefully de-soldered the battery and removed any surplus solder on the contacts. Then I used a new battery holder, which I had salvaged from an old PC motherboard and wired that to the circuit board of the DW8000. After putting in a new CR2032 battery it was time for a first test… Getting sounds into the DW8000

Switching on the DW8000 was no problem and everything still seemed to work as should. When pressing a key, I heard a sine like sound through the headphones. It worked!

For a good test I downloaded a sound file of the Korg factory sound bank as there are two ways to transfer sounds into the DW8000. By MIDI dump (from a computer) or by using a tape recorder to play a cassette containing the sound data. I used the second method and that’s why I needed the sound file. I transferred the sound file to my iPhone and connected the headphone output to the TAPE IN terminal of the DW8000. Then, I pressed play on the iPhone and LOAD on the DW8000…. and it worked! The loaded bank was displayed (1 to 8) and a very reassuring GOOD was displayed after the load was finished. A quick check learned that the sounds were loaded into memory and sounded great. Next, I turned off the DW8000, waited a little while and turned it on again. All data was still there. Excellent!

Using my iPhone to load sound banks through the tape input of the #Korg #DW8000 Can’t get more retro than that! pic.twitter.com/E534OYKXYb

I haven’t created any sounds myself yet and have only played around with the factory sound bank. I think the sound quality is excellent. There are some sounds with artefacts/distortion in them but I think that has to do with the unison mode they’re using. I especially like the deep analogue sounds with filter sweeps. And I could play for hours with the on-board arpeggiator. Great fun!

If you’re looking for a nice and relatively cheap vintage hybrid synth, the KORG DW-8000 should definitely be on your list!

Here are some links with more information on the Korg DW-8000.