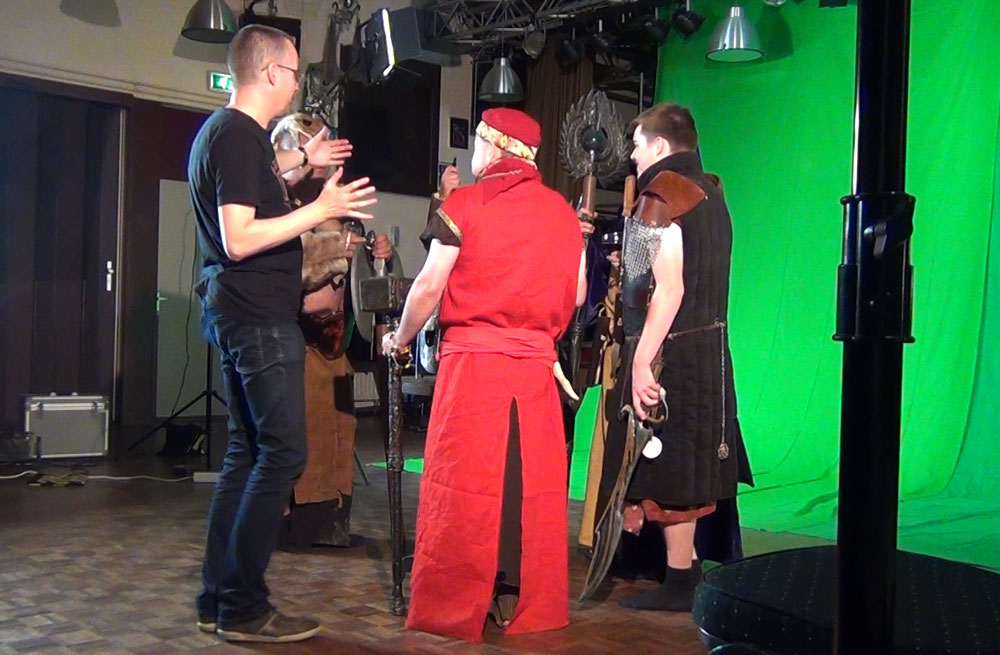 So, what have you been doing last year?

Now 2015 has ended, I want to write a bit about a project that has kept me busy for the most part of last year.

This project began sometime in August 2014 when a couple of friends asked me if I would like to participate. They are part of a brass band and wanted to organise a concert where the band would perform well-known movie soundtracks. During the performance, they wanted to screen short films based on the real film. The plan was to shoot 10 short films to be screened during the performance of the band.

After a year of shooting, editing, creating visual effects and rendering, the project ended on October 18th with the performance of the band in a small theatre.

After I had agreed to be part of the project, we had a couple of meetings on how to tackle this project. The initial date for the performance was set for April 2015. I quickly convinced them that this would not be possible. Shooting 10 short films in 4 months and doing the necessary post production would be impossible as far as available time was concerned. Also, as the shoots would have to be planned in weekends, it would be difficult to get everyone together almost every weekend for 4 months. The concert date was moved to October 2015.

So, the first thing we did was setting the dates for the shoots. That way we had solid dates to work towards and everyone could reserve these weekends in their schedules. The crew consisted mostly of the same people while the cast would change from shoot to shoot.

Before each shoot I talked to my friends, who acted as producers, to discuss the story. When needed I did a rewrite and created a shot list from that so I was prepared for the actual shoot. Most films were shot in 1 day with the exception of one 10 minute film which took 2 days to shoot.

Pirates of the Caribbean

The story for Pirates of the Caribbean came from the youth division of the band. They were also the actors. The story is about Jack Sparrow who cheats during a game of dice which results in a big chase through the woods.
We shot this film on a beautiful autumn day. For more details on this shoot read my blog post “Making videos with kids for a youth concert”. The first part of this video was shot indoors, the rest was shot outside. Getting a low camera angle for an action shot Using the home made stabilizer for a chase scene Directing the kids for the next scene

The video was shot on Panasonic AF100 and Canon HF G25 (used with a home made stabilizer for the chase scenes). Post production consisted of editing, removing unwanted objects and people from a couple of shots and colour grading.

Titanic was the second film we shot with the youth musicians. This was a green screen shoot where they made fun of the famous Titanic scene with Leonardo DiCaprio and Kate Winslet. After setting up the green screen and dialling in the lighting the shoot went pretty smooth. The video was shot on Panasonic AF100 and post production was done in After Effects. I created some animations and composited the actors into a cartoon Titanic. Having fun on set

The soundtrack to this video was 8 minutes long so we had to shoot enough material to support the music. This was a green screen shoot about two duelling cowboys who fail to hit each other time after time. The spectators however are not so lucky… 😉 The pacing was pretty slow so I used long shots and close-ups to mimic the Morricone feel.

Practical effects in front of a green screen: shooting hats off heads

The location we had available for this shoot was rather small and I had to improvise a bit with the green screen set-up. For example, I couldn’t get the actors as far away from the green screen as I would have liked and the width of the room did not provide much moving room for the actors.

The film was shot on the Blackmagic Cinema Camera (BMCC) in raw. Compositing was done in Blackmagic Fusion and colour grading in Davinci Resolve. It was the first time I used the BMCC and Fusion and I wanted to use this project to learn this application. As I was already familiar with the node based approach in Davinci Resolve, I had no problems using Fusion. I really like it and although I only used it for compositing and some colour correction I found the learning curve not very steep.

Symphonic Marches is a mix of three soundtracks, Indiana Jones, Star Wars and the Olympic Theme. The film is a fun story about (In)Diana Jones vs Darth Vader in conquest of a treasure. One of the band members had arranged for great Star Wars costumes which looked great on camera. The interior scenes (Indy getting the treasure in a parody of the famous opening scene from Raiders of the Lost Arc) were shot in front of a green screen on Blackmagic Cinema Camera in raw. The exterior scenes were shot on Panasonic AF100. I picked the AF100 for its ergonomics and built-in ND filter which made it easier to use for the run & gun style shoot on this sunny day. Darth Vader is also after the treasure I used the BMCC on a Kessler Crane Pocket Jib which saved a lot of time as it is very easy to move the camera in comparison to adjusting a tripod setup. Most compositing was done in Fusion. Two shots were done in After Effects where I used the Videocopilot Element 3D plugin for compositing a 3D model of a Star Wars Tie Bomber into the scene. I made this decision because of time constrains as I had used the Element 3D plug-in before on my short film I Want To Believe and knew how it worked. I feared that learning compositing 3D objects in Fusion would take me too much time.

There were a lot of things I could have done better, especially concerning the green screen. So I learned a lot from this shoot but due to these “mistakes” post production of this film took a long time.

This video was shot by the brass band themselves during a march through their neighbourhood. I edited the video in Adobe Premiere and did some minor colour correction and applied noise reduction on some shots.

This video was a photo slide show which I edited in Adobe Premiere.

This film is about the tale of Columbus’ Egg. It was shot on Blackmagic Cinema Camera in raw using green screen. I shot the background plates inside the actual water tower which is featured in the film. Compositing was done in Fusion, colour grading in Davinci Resolve. This is the soundtrack to the Dutch film “Soldaat van Oranje” aka “Soldier of Orange”. The video to this music was completely shot on location on a lovely summer day. We had all locations planned out after thorough location scouting and I had a detailed shot list in ShotLister app. The original plan was to shoot on Saturday but the weather was awful. We postponed the shoot till Sunday which provided us with a beautiful summer day. I feared we didn’t have enough time to shoot all necessary scenes in one day but the shoot went super smooth and we finished 2 hours ahead of planning. Excellent!

I think this is the shoot I enjoyed the most. The film had a fight scene, several chase and action scenes and I shot one scene from a moving car. The weather was perfect, the actors and crew did an excellent job and we all had a great time. Setting up for a fight scene The actors and crew: it’s a wrap!

The only visual effects shot, compositing German World War II bombers in the sky, was done in After Effects using the Videocopilot Element 3D plugin. Then I had to do some innocent-bystanders-walking-into-frame removal for a couple of shots which was also done in After Effects. The final colour grade was done in Davinci Resolve where I went for a slightly desaturated look with emphasis on brown colours to give the final image a kind of dated look. You can watch the end result below.

The Lion King was shot by one of the band members during his holiday in Uganda. I finalized the edit of the video in Premiere and used After Effects to stabilize some shots. Colour grading was done in Davinci Resolve.

This music is not from a film. It is a fantasy story about a group of adventurers going on a quest to kill a dragon. We shot this video in 2 days, the actors were in front of a green screen the whole time. They had arranged for a LARP (Live Action Role Playing) wardrobe and weapon props for each character and it looked great.
Unfortunately we shot this film last (in September) so I didn’t have much time for this one to finish in time for the performance in October. I was thinking about using a CG model for the scenes with the dragon but that would have taken way too much time. So I borrowed a 15 cm high model of a dragon and used that for the dragon scenes. Not very spectacular but it was OK in the context of this film as it was rather meant to be funny than scary. Instructing the actors for the opening scene The heroes were no match for the dragon…

Post production wise, this film took the most time of all films we shot. Green screen was used in every scene and I had to edit almost all background photo’s to fit the scene. All compositing and colour correction was done in Fusion and I used Davinci Resolve for the final colour grade. The beams in the resurrection scene were done in Adobe After Effects.

During the show I used the Blackmagic Cinema Camera to record the performance of the band. I was also controlling the playback of the short films from the control room in the back of the hall. For this to go smoothly I had rendered all films in the right order as one large video so I only had to pause playback at the right times. This worked very well and I was even able to compensate for the band playing a bit slower than usual a couple of times by pausing a few seconds into a fade to black so the band could “catch up” with the video.

All went well and it was great to see the audience react to the music and the films. After the concert, I even had a moment on stage to explain a little bit of what went into shooting the videos. On stage after the film concert

This has been the biggest project I’ve undertaken so far. With 10 short films shot over a one year period the post production for some of these films took quite some time. That was OK. I used this project to learn stuff during the shoots and to get more experience using Davinci Resolve and Fusion.

I really enjoyed the shoots as the actors and crew, the members of the brass band, were great to work with. We had a lot of fun.