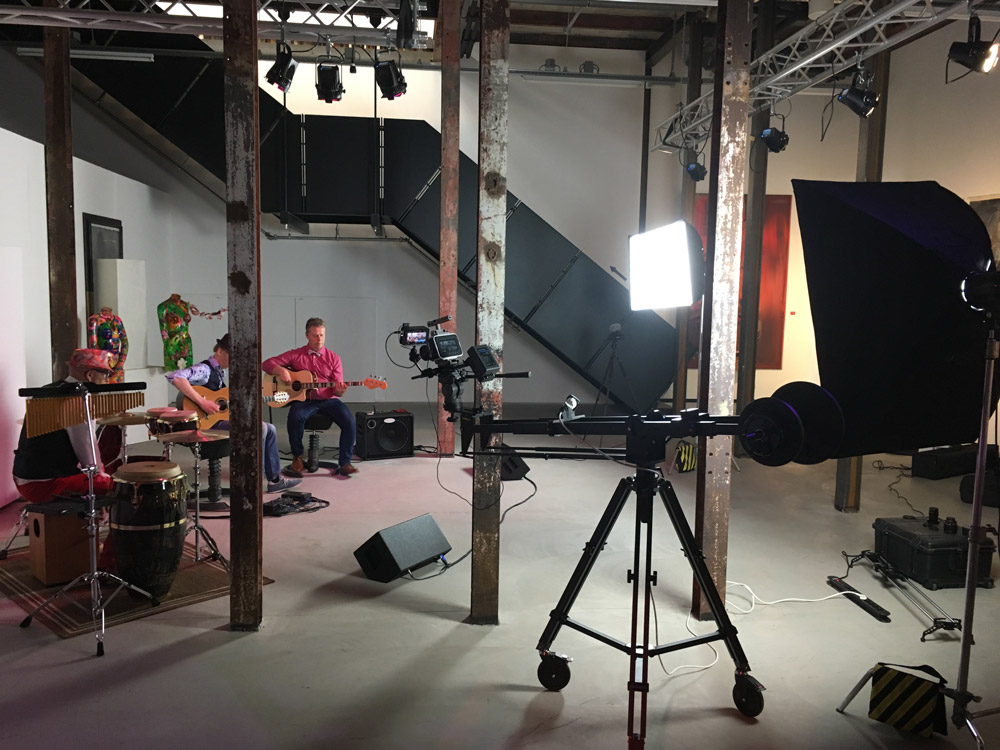 Last Wednesday I shot a music video with the Dutch band Pega Loca. This is the second music video I shot with Eric van de Kerkhof, who started Pega Loca. Two years ago, I made a video for promoting the debut album “Welcome Home” of his previous band, Grain of Wood, with the track “Just a Little Higher”.

We shot the video in a cultural centre in one of their art exposition spaces. It was a big room with a lot of steel pillars. I killed the room lights and used 2 soft boxes to light the musicians. One at full power which acted as key light and the other at half power, a bit further away, which acted as a fill light. As this set-up was fairly simple it took about an hour to unload all our equipment and to set everything up.
After setting up our gear we covered up the art in the room that would be in view during the shoot. This to prevent any copyright issues.

I shot the video on the Blackmagic Cinema Camera using 2.5K raw. An Atomos Samurai Blade was used to check focus and exposure. The camera was mostly mounted on a Kessler Pocket Jib/K-pod setup. I love to use this setup as it is very versatile and allows me to change camera angles very fast. As the floor in the exposition space was very smooth I used the wheels on the K-pod to be able to move the jib very easily.

I used the Cinevate Atlas 30 slider for a couple of wide angle shots. This slider moves very smooth and can take a lot of weight. I also had a second unattended cam for shooting BTS footage. Unfortunately the BTS footage was a bit out of focus here and there as I had forgotten to set the camera to auto focus.

The band wanted the video to be a recording of them playing together and having fun. So we kept it simple. They played the track a number of times and I focussed my shots an something different every time. I first shot the wide angles and after that I focussed on the musicians. This way I have enough angles to make an interesting edit. The band playing their track

All went very smooth and we wrapped up early. Everybody enjoyed the shoot. BTS frame grab of me using the slider

Next: editing and colour grading!